Create a New List:
!List Name Required
Shipping Saver
Shipping Saver items cost less to ship, so we can pass the savings along to you!
Combo Offer: Save $2.00 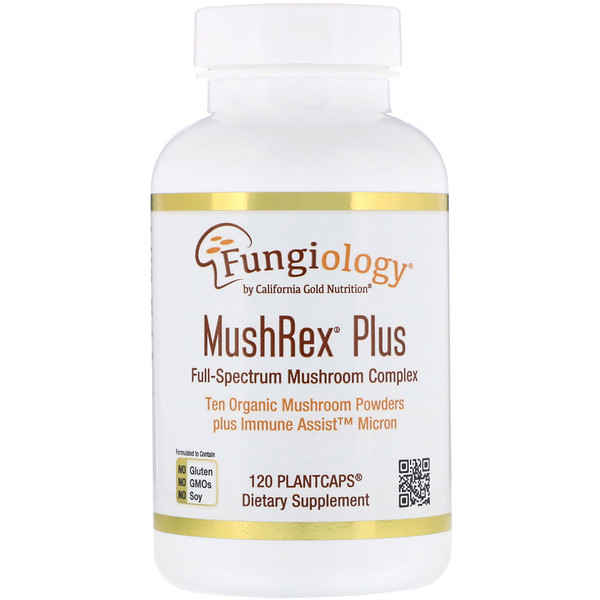 Fungiology MushRex Plus, by California Gold Nutrition, is a combination of an Organic Full-Spectrum Mushroom Powder Blend and Immune Assist™ Mushroom Complex Extract. This proprietary formula contains Agaricus, Chaga, Cordyceps, Lion's Mane, Maitake, Oyster Mushroom, Reishi, Sanghwang, Shiitake, and Turkey Tail. These organic mushrooms are cultivated and packaged in the USA and the Full-Spectrum of the mushrooms are used which consist of the mycelium, the primordia, the fruiting bodies as well as the naturally occurring extracellular compounds.

Agaricus blazei is also known by common names such as Himematsutake, Royal Sun Agaricus, and Almond Flavored Portobello.  In the 1960s, samples of Agaricus blazei were sent to Japan from Brazil to be analyzed and studied clinically. Since that time, this mushroom has gained respect for its supportive role in the nutritional and holistic medical communities.  Agaricus blazei contain polysaccharides known as beta glucan which studies suggest can help to support a healthy immune system.*

Generally found in the wild growing on birch trees, Chaga has a long history in European folk medical traditions and is familiar countries such as Russia, France, Germany and Norway.  Research suggests that various compounds in Chaga, such as beta glucans, antioxidants, polyphenols, flavonoids and selenium, help to play a role in supporting a healthy immune system.*

Often recognized as an adaptogen, Cordyceps is highly regarded for its supportive role in nutritional and holistic medical communities. In Traditional Chinese Medicine, Cordyceps is recognized as a Lung and Kidney tonic.  Cordyceps contains many phytochemical compounds such as polysaccharides, terpenes and flavonoids that studies suggest can help to support a healthy immune system.*

Although Lion's Mane has a long history as a culinary mushroom, it has more recently gained respect for its potential to support overall healthy aging and wellness.  There is new found interest in Lion’s Mane mushrooms as research suggest their potential supportive role in healthy nerve and brain function.*

Maitake has many nicknames such as Hen of the Woods, Sheep’s Head and the Signorina mushroom.  This mushroom is popular in Japan which is where it gets the common name, Maitake. Research suggests that Maitake mushrooms may help to support healthy blood sugar regulatory systems as well as the innate and adaptive immune system due to a variety of unique phytochemicals such as beta glucans and enzymes.*

This edible mushroom is considered a delicacy in Asia and Europe and has been gaining interest for its potential health benefits.  Research suggests that Oyster mushrooms may benefit the immune system due to phytochemical constituents such as polysaccharides, lectins, and peptides.*

Reishi is known as Lingzhi, or "Divine Fungus", in China and is perhaps the most widely studied medicinal mushroom. There are a number of phytochemical compounds found within Reishi such as polysaccharides known as beta glucan, triterpenes and ganodermic acids which studies suggest can help to support a healthy immune system, healthy lipid metabolism and overall vitality and wellness.*

Sanghwang is recognized in Asia as a medicinal mushroom and has many regional names such as Meshimakobu, Song Gen, Meshima and Black Hoof mushroom. This mushroom grows wild on mulberry trees and is traditionally consumed as a tea.  There is increasing interest in this mushroom as research explores it’s potential benefit to the immune system.*

Shiitake has a long history as a culinary and a medicinal mushroom.  Shiitake mushrooms are also commonly referred to as Sawtooth Oak, Black Forest or Golden Oak mushrooms. There is ongoing research into this mushroom and the beneficial effects of their polysaccharides on the immune system.*

Turkey Tail is also known as Polyporus versicolor and is called Turkey Tail due to its resemblance to the multicolored tail of a wild turkey.  The polysaccharides and beta glucans within Coriolus versicolor have been studied around the world for their role in supporting the immune system.*

Take 1 veggie capsule daily, with or without food. Best when taken as directed by a qualified healthcare professional.

This product is not manufactured with milk, eggs, fish, crustacean shellfish, tree nuts, peanuts, wheat, soy or gluten. Produced in a third-party, audited and registered cGMP compliant facility that may process other products that contain these allergens or ingredients.

Keep out of reach of children. Consult with a licensed physician, pharmacist, naturopath or other qualified healthcare professional prior to taking dietary supplements.

Sealed for your protection. Do not use if seal is missing or broken. Best stored at controlled room temperature (CRT) 20°C to 25°C (68°F to 77°F). Improper storage conditions, such as extended exposure to direct sunlight, high heat & humidity can cause product degradation over time.