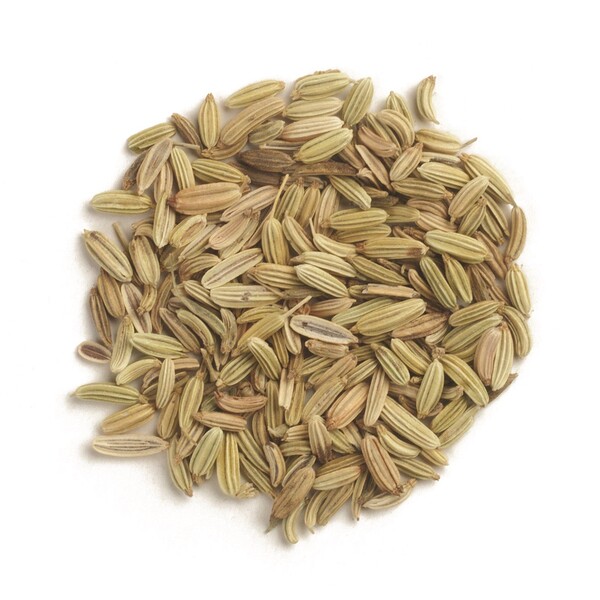 #3 in Fennel Spices >
Frequently Purchased Together

Fragrant and distinctive, fennel's slightly licorice taste is most often enjoyed with fish. But don't save it for fish nights; try it's anise-like flavor in soups and salads, and with grains and vegetables, too.

A graceful plant, fennel is an aromatic, hardy, perennial with golden yellow flowers and feathery leaves. Also known as garden fennel, this plant's botanical name, Foeniculum vulgare, comes from the Latin for "fragrant hay", it is a member of the Apiaceae family--along with anise, caraway, coriander and dill. Fennel seeds are small, oval, and grooved. They resemble caraway seed (though less curved) and smell and have a lemony anise taste. Fennel was well known as a food, flavoring and medicine in ancient China, Greece, India and Egypt. Since Roman times it has been used as a diet aid and to overcome hunger during fasts. In fact, its early Greek name, marathron, comes from maraino, which meant "to grow thin." The Roman emperor Charlemagne popularized the use of fennel seed in Central Europe, and the ancient Saxons included the seed in their list of nine sacred herbs used to combat the nine causes of disease.

Pliny, the ancient Greek historian, believed that fennel improved eyesight--evidenced, he said, by serpents that routinely ate fennel to restore their sight after being temporarily blinded when shedding their skins. Ever since, fennel tea and eyewash have been used to soothe strained eyes, improve eyesight, and treat cataracts. The Greek physicians Hippocrates and Dioscorides also recommended fennel--to increase the flow of milk in nursing mothers.

Historically, fennel is a symbol of flattery and heroism, an aphrodisiac and rejuvenator. Like the ancients, the Medievalists used it suppress appetite, but they also hung it over doorways on midsummer's eve to protect against witchcraft. Much later, the Puritans stuffed keyholes with the herb, to keep evil spirits out. It was also one of "the meetin' seeds," chewed during long church sermons to divert boredom and quiet noisy stomachs. Colicky babies of the time were often given fennel tea.

To preserve its delicate flavor, add fennel at the end of cooking.