Create a New List:
!List Name Required
Shipping Saver
Shipping Saver items cost less to ship, so we can pass the savings along to you!
Combo Offer: Save $2.00

By Garden of Life
216 Reviews | Write a Review 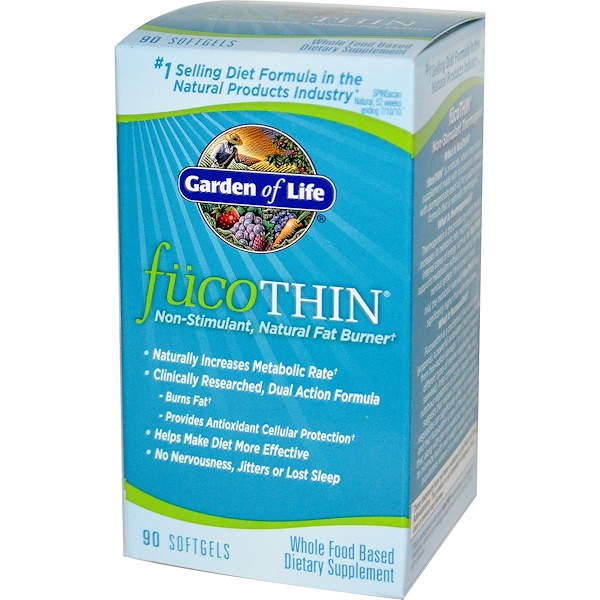 #65 in Fat Burners >
Frequently Purchased Together

fücoThin is a natural , whole food based supplement made with fucoxanthin combined with pomegranate seed oil, for a patent-pending formula that is naturally thermogenic.

Thermogenesis is the process by which the body increases it metabolic rate, requiring utilization of internal stores of energy such as fat. fücoThin supports metabolism without stimulating the central nervous system. In a human clinical trial, the metabolic rate with fücoThin was significantly high than with diet alone.¹

Fucoxanthin is a carotenoid (like lutein and lycopene), a powerful antioxidant that protect cells from free-radical damage. It is found in several different types of marine vegetables (edible seaweed), long considered among the most nutritious vegetation on Earth. Recent research suggest that natural compounds in marine vegetables can significantly affect fat metabolism and that fucoxanthin is one of the key ingredients that, along with diet and exercise, may have helped to minimize health and weight issues among Asian populations where it is consumed the most.

The only fucoxanthin formula with "Gold Standard" human clinical studies.

Mechanism of Action: fücoThin works by increasing the expression of UCP1 in the mitochondrion of cells. This creates additional heat, or thermogenesis, within cells which burns fat.

Non-Stimulant: Unlike ephedra of caffeine, fücoThin burns fat without stimulating the central nervous system no nervous, jitters or lost sleep.

¹ Study participants who used fücoThin experienced and increase in metabolic rate and an average weight loss of 14.5 lbs.vs 3 lbs. with placebo.

Adults take one softgel three times daily with food and at least 8oz. of water. Not intended for children.

Manufactured on equipment that may process soy, wheat and/or fish (anchovy, sardine).

Contain no artificial colors or preservatives.

Caution: As with any dietary supplement, consult you healthcare practitioner before using this product, especially if you are pregnant, nursing, anticipate surgery, take medication on a regular basis or are otherwise under medical supervision.

Clinical research indicates that it may take 6 weeks of consecutive use to experience significant thermogenic response.

Do not take if safety seal is broken or missing.