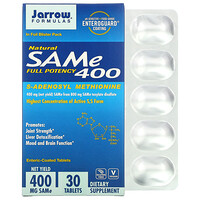 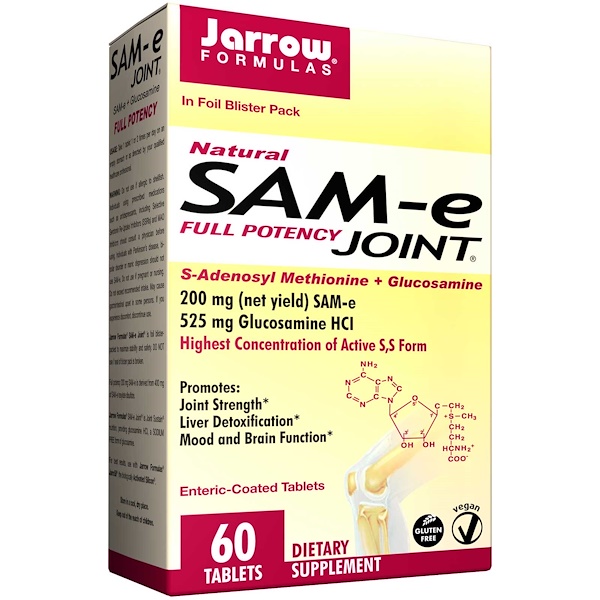 This product complies with the proposed USP Monograph for SAM-e.

Found in all living cells, SAM-e is a metabolite of methionine (an essential amino acid). SAM-e is a chiral molecule and consists of two forms: (S,S) SAM-e and (R,S) SAM-e. The biologically active form is the (S,S) structure, while the (R,S) structure is biologically inactive. Jarrow Formula's SAM-e is made naturally by microbiological fermentation and then specially processed without solvents to preserve 68-80% (S,S) SAM-e, the highest active level available.

Glucosamine is an aminosaccharide synthesized by transaminase enzymes from glucose and an amine group from glutamine. HCl (hydrochloric acid) stabilizes the glucosamine in this product. Glucosamine is a component of joint and intestinal tissue and is involved in the production of synovial fluid which lubricates the joints.

SAM-e has been clinically shown to have the following benefits:

SAM-e supports the production of healthy connective tissue through transulfuration. In this process, critical components of connective tissue, including glucosamine and the chondroitin sulfates, are sulfated by SAM-e metabolites.

SAM-e methylation reactions are involved in the synthesis of neurotransmitters such as L-DOPA, dopamine and related hormones, epinephrine and phosphatidylcholine (a component of lecithin).

Methylation of DNA appears to be important in the suppression of errors in DNA replication. Demethylation of DNA is considered a contributor to the aging process. Proper methylation through substances such as SAM-e positively influences longevity.

Take 1 to 2 tablets per day on an empty stomach, or as directed by your qualified health care consultant.

For best results, use with Jarrow Formulas JarroSil, the biologically Activated Silicon.

No wheat, no gluten, no soybeans, no dairy, no egg, no fish, no peanuts/tree nuts.

Do not use if allergic to shellfish. Individuals using prescribed medications such as antidepressants, including Selective Serotonin Re-Uptake Inhibitors (SSRIs) and MAO Inhibitors should consult a physician before using. Individuals with Parkinson's disease, bi-polar disorder or manic depression should not use SAM-e.

Jarrow Formulas Sam-e Joint is foil blister-packed to maximize stability and safety. Do not use if seal of blister pack is broken.

Keep out of the reach of children.