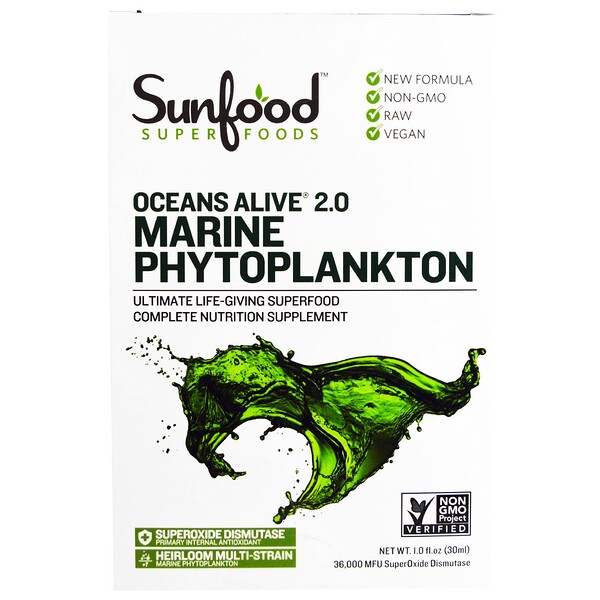 What is Marine Phytoplankton?

Phytoplankton has been around for nearly 3 billion years, and is the basis of all life formed on earth. Transforming CO2 into oxygen, it is responsible for creating the earth's atmosphere, and allowing life to flourish. This powerful microalgae is bursting with all the nutrients needed to sustain life on the cellular level. Every life-giving molecule that makes up the entire planet can be found in different strains of Marine Phytoplankton. The nano-sized nutrient particles are easily absorbed, and quickly ready to be used by the body.

Using the latest technology and after years of natural selection, we've developed an All New Formula of Oceans Alive Marine Phytoplankton. This advanced formula contains more SuperOxide Dismutase (SOD) than ever before -1200 MFU per 1 ml serving, 36,000 MFU per bottle. SOD is an incredibly potent antioxidant enzyme produced by virtually every cell in the human body; it reduces free radicals formed during normal metabolic cell processes, and protects against oxidative damage.

Oceans Alive 2.0 is loaded with SuperOxide Dismutase (SOD) - 36,000 MFU per bottle - an incredibly powerful antioxidant enzyme. Naturally occurring in the human body, SOD protects virtually every cell from harmful free radical toxicity and may also act as a powerful anti-inflammatory.

Start with a few drops daily mixed in with 8 oz glass of water or beverage of your choice. Build up to a dropper-full (about fifteen drops or 1.0 ml) over time, depending on your body's reaction. Try mixing into your favorite smoothie.