Fish Oil vs. Krill Oil: Which is Best for You? 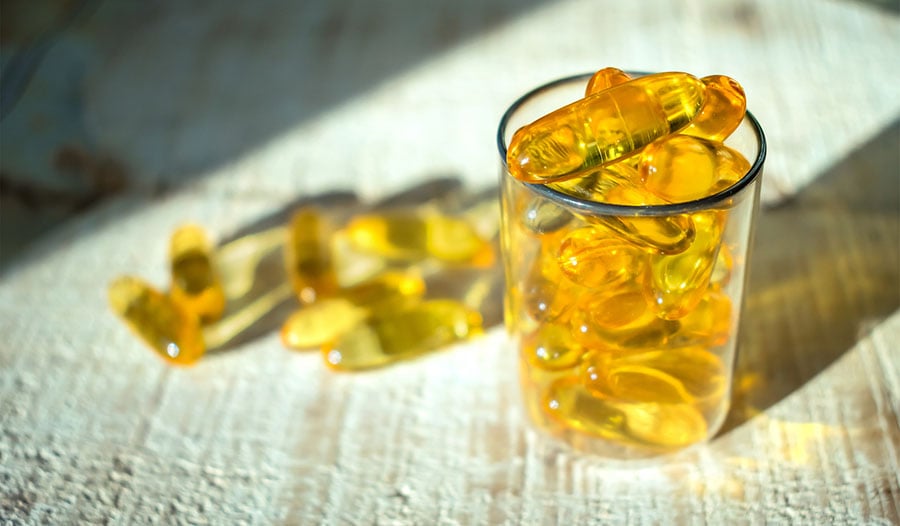 Similarities Between Fish and Krill Oil

A 2016 study showed a similar elevation in blood levels of DHA/EPA when equivalent doses of fish oil and krill oil were given to test subjects over four weeks.

Sources of Fish vs. Krill Oil

Fish oil comes from fish. Commonly, commercial fish oil comes from tuna, herring, and sardines. When extracted, fish oil generally has a white or yellow color. It has low antioxidant properties, meaning it does not work well as an anti-oxidant. It is delivered to the body as a triacylglyceride (TAG) when consumed. Commercial-quality fish oil needs to go through additional purification processes to eliminate heavy metals that may be present.

Likewise, krill oil comes from krill, crustaceans harvested from the Antarctic area. Krill feed on phytoplankton and marine algae and are at the bottom of the food chain. As a result, in their natural habitat krill have little to no heavy metal exposure, so extra purification is not required.

A krill is a small, red, lobster-like creature found in the southern Atlantic Ocean. Krill oil is an essential fatty acid with a distinctive red color. It tends to be more expensive than fish oil. When consumed, it is delivered to the body in phospholipids.

Worldwide, krill tend to be more plentiful than fish, so in total, extracting adequate DHA/EPA from krill has more long-term sustainability potential than extracting these oils from fish.

Is Eating Seafood a Good Alternative?

One should get all their vitamins, minerals, and essential fatty acids from foods. This is what I advise my patients, but I know it’s not always possible. The American Heart Association recommends regular fish consumption at least twice per week for heart health. For those who prefer vegetarian alternatives, consuming certain foods can be a good source of alpha-linolenic acid (ALA), which can be converted into DHA. ALA can be found in flaxseed, walnuts, soy, chia seeds, and hemp seeds.

If relying solely on food, consumption of adequate DHA and EPA from animal sources can be a challenge due to the pollution of our oceans. For example, fish such as mackerel, swordfish, bass, shark, and tuna tend to have higher-than-average levels of mercury and should be eaten sparingly. Fish such as salmon, catfish, anchovies, sardines, herring, trout, and tilapia have lower levels of mercury, but the levels can add up if consumed more than two or three times per week.

Osteoarthritis usually results from general wear and tear of the joints. It results from the destruction of cartilage, which acts as a cushion that covers the bone. Early signs of osteoarthritis may begin when an individual is around 40 years old and can progress as one ages. Symptoms include joint pain, swelling stiffens, and loss of joint function. Natural alternatives are sought by many to help with symptoms. Generally, doctors prescribe non-steroidal anti-inflammatory drugs (NSAIDS), such as ibuprofen, naproxen, and indomethacin.

Studies show essential fatty acids help improve joint pain and reduce the use of NSAIDs. Studies also show a reduction of joint stiffness when fish oil is taken daily at a minimum of 500 mg per day up to 2,000 mg per day.

A 2007 American Journal of Clinical Nutrition study showed that 300 mg of krill oil “significantly inhibits inflammation and reduces arthritic symptoms within a short treatment period of 7 and 14 days”. A 2016 double-blind, placebo-controlled study of patients with mild knee pain demonstrated that krill oil could reduce pain at daily doses of 2,000 mg per day.

Cardiovascular disease is a major killer of people all over the world. Various risk factors contribute to increased heart and vascular disease risk. Omega-3 fatty acids may be beneficial.

Regular consumption of omega-3 fatty acids is important for heart and vascular health. A 2017 study showed it can help prevent atherosclerosis, or hardening of the arteries, while a 2013 study in the Journal of the American Heart Association showed that higher levels of DHA/EPA in the blood were associated with a lower risk of cardiovascular disease.

A 2015 study in the British Medical Journal concluded: “Krill oil may lead to moderate improvement of cardiovascular risks, specifically endothelial dysfunction and HDL in patients with type 2 diabetes.” However, the benefits also apply to those who do not have diabetes. A 2017 study in Nutrition Reviews also showed that krill oil could benefit the heart by reducing bad (LDL) cholesterol and triglycerides, both risk factors for heart disease when levels are elevated in the blood.

Inflammation results when there is an imbalance in the body—in a sense, the body is internally “on fire”. When stressed, the body produces a steroid hormone called cortisol in excess.  When cortisol is elevated, the body makes inflammatory chemicals called prostaglandins. Inflammation can also be evaluated by measuring C-reactive protein (CRP) levels in the blood.

According to a 2017 study in the Journal of the American College of Nutrition, elevated levels of CRP increase the risk of cancer and heart disease. In 2008, the Jupiter study showed cholesterol-lowering statin drugs could reduce inflammation. Krill oil and fish oil may also play a role.

Fish oil is well known to help lower CRP levels. A 2016 study showed this as the case but also that krill oil was more efficient than 2,000 mg of fish oil. However, another 2016 study in the Journal of Internal Medicine showed that when 1,400 mg of fish oil was consumed, CRP level was not lowered. Based on this, I would recommend a dose of at least 2,000 mg of omega-3 fish oil twice daily to lower CRP levels.

As populations age, memory concerns become more common. Alzheimer’s disease, the most common form of dementia, has no specific cure and can cause enormous frustration and challenges to patients and caretakers alike. Symptoms include forgetting names and confusion in the early stages, while late-stage Alzheimer’s can give way to more severe issues, like paranoia and abusive behavior. Scientists predict that after 65, one in nine people are at risk. Natural treatments, such as turmeric and Boswellia, appear helpful with DHA and EPA.

A 2017 study in the International Journal of Molecular Sciences showed that krill oil could help reduce brain oxidative stress and beta-amyloid deposits, believed to be the cause of Alzheimer’s disease. More research is currently underway.

Triglycerides are a type of fat that circulates in the blood. Ideal levels should measure less than 150 mg/dl (or less than 1.7 mmol/L). Elevated levels are a risk factor for heart attack and stroke. Lowering them by consuming a low-sugar, low-simple-carbohydrate diet can also be beneficial, but sometimes that is not enough. An EPA/DHA supplement can be considered.

Pharmaceutical drug companies have allegedly realized the benefit of lowering triglycerides and have developed a pharmaceutical-grade fish oil. However, due to its high cost, many cannot afford it.

A 2014 study showed a 10-percent reduction in triglycerides in response to krill oil. A 2017 study in Nutrition Reviews of 662 patients showed similar results in those who consumed krill oil. Other studies have supported these findings.

Those with allergies to fish or shellfish should be cautious as they may have an allergic reaction. Consult with your physician prior if you have any questions.

Krill is a small, red, lobster-like creature found in the Atlantic Ocean. Krill oil is an essential fatty acid that is extracted from the crustacean. It contains the same omega-3 fatty acids as omega-3 fish oil and, for that reason, is chosen by many as an alternative. The fatty acids included in krill are docosahexaenoic acid (DHA) and eicosapentaenoic acid (EPA).

Fish Oil Vs. Omega-3: Which Is the Better Supplement Option?

From fish oil to plant-based sources, a physician discusses the many forms of omega-3s and helps you choose a high-quality supplement that’s right for you.

What Is Calanus Oil? Here are 5 Health Benefits

The potential health benefits of fish oil are well known, but what about Calanus oil? What is it? Is it a viable alternative to fish oil? Learn more.