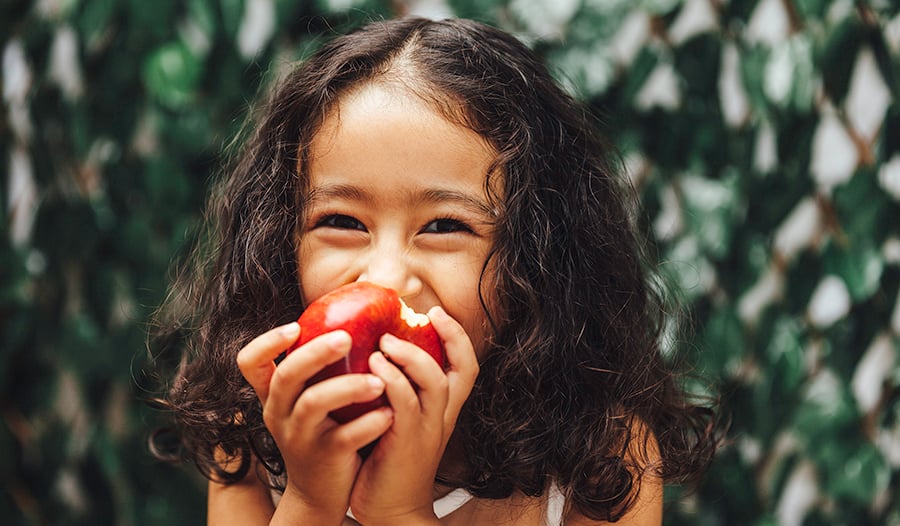 A well-balanced nutritious diet rich in healthy proteins, fats, vitamins, and minerals is one of the most important things required for a healthy child to grow. Chronic nutrient deficiencies, especially during childhood, can increase the risk of chronic, long-term health issues.

Nutritional deficiencies can result from consistently eating nutrient-poor foods or from the malabsorption of nutrients. To help combat such nutritional food deficiencies, the United States started food fortification — the practice of adding micronutrients to dietary staples — in the 1920s1. By 2020, 83 countries now require fortification of flour, maize, and rice-related foods. Still, up to 60 percent of children worldwide do not consume fortified foods.

Examples of food fortification include:

The following are important nutrients for children.

A deficiency in iron is one of the most common nutritional deficiencies in children worldwide, affecting between 30 to 40 percent3. In breastfed infants, iron deficiency is uncommon unless the mother also happens to have an iron deficiency. Children over 12 months of age who drink more than 24 ounces of cow’s milk per day are at increased risk for iron deficiency. This occurs due to milk’s potential to irritate the intestines, resulting in chronic blood loss.

Food sources of iron include:

Vitamin D deficiency is common in children, affecting up to 60 to70 percent of those tested. It is particularly prevalent during the winter and spring months due to reduced exposure to sunlight. Traditionally, severely low levels of vitamin D are associated with rickets, which results in severe bowing of the legs. Low levels of vitamin D may also increase the risk for bone pain (osteomalacia and growing pains), poor growth, psoriasis, and increased risk for upper respiratory infections.

Those with darker skin pigment are at higher risk for vitamin D deficiency, even when adequate time is spent in the sun. Melanin, the protein that results in pigmentation, acts as a “natural sunscreen,” which blocks the ultraviolet light (UV-Light) required for the skin to make vitamin D.

Childhood obesity, which is becoming more common, is also a risk factor for vitamin D deficiency.

Breastmilk is commonly considered a poor source of vitamin D, however, this is only because most lactating mothers are also deficient. Most nursing moms need at least 6,000 IU daily in order to ensure their milk is replete with vitamin D. Pregnant women also frequently supplement with 2,000-5,000 IU per day.

Many pediatricians recommend vitamin D supplementation in babies during the first year of life. The National Academies of Sciences, Engineering, and Medicine states 600 IU (but no more than 1,000 IU) can be given daily. They suggest the safe upper limits for children depends on age.

The Endocrine Society suggests a higher dose limit for kids, recommending an upper limit of 2,000 IU for infants up to 12 months. For those over 1 year of age, they agree with a daily dose of up to 4,000 IU.

Consult with your physician if you have any questions. Vitamin D is available in liquid drops, gummies formulations, and capsules.

Iodine is not only important for thyroid health but also for proper development of the reproductive system and brain. Worldwide, this is one of the more common deficiencies primarily due to low iodine content in soils in various places across the globe. A 2004 study4 out of Turkey showed that 46 percent of school-age children were deficient.

If you are concerned that your child may not be getting sufficient iodine through food, a supplement can be considered. For most kids, the amount of iodine in a multivitamin is sufficient unless a higher dose is recommended by your pediatrician. Suggested dose: As suggested on the label.

According to a 2004 study5, 14 percent of males and 10 percent of females were vitamin C deficient. This includes children — 6 percent of kids aged 12 to 17 have low blood levels of vitamin C. Along with bleeding gums, easy bruising, and slow-healing wounds, weakened bones are a serious consequence of this deficiency, with long-term implications for children as they grow. But luckily vitamin C is available in many common foods that many kids enjoy.

If consumption of adequate vitamin C through diet is not possible, then supplementing should be considered. Gummie formulations are popular with children, and capsules and powder supplements are also available. Most kids need no more than 250 mg per day although those over 12 can safely take 500 mg per day.

A children’s multivitamin is a great way to ensure that at least minimal amounts of various vitamins and minerals are being consumed. A quality multivitamin includes calcium, biotin, vitamin A, vitamin E, zinc, and much more. Pediatric multivitamins come in liquid, gummies, or capsule formulations.

Trouble sleeping is not unique to adults, and children can also be affected. One study6 showed up to 4 percent (1 in 25) of children have sleep issues. However, medication is not an ideal approach as it is important to avoid prescription medications in children when possible. If your child has sleeping difficulty, evaluating the root cause is absolutely necessary — common causes of poor sleep quality at any age can include serious conditions like anxiety, depression, allergies, or sleep apnea. Once these possibilities have been evaluated and ruled out, 1 to 3 mg of melatonin, a natural hormone that aids the sleep cycle, may be considered. Melatonin should be taken about two hours prior to bedtime. Children formulations include liquids, chewables, and gummies.

Omega-3 fatty acids are important for the growing brains of young children. However, in many places around the world, children don’t eat the volume of foods rich in essential fatty acids that they should. This can cause delayed growth, skin issues, and neurological issues.

Omega-3 Fatty Acids may have benefits for the following:

When it comes to choosing a children’s probiotic, it’s easy to become overwhelmed. There are so many different types and strains on the market. And though our knowledge of probiotics has grown considerably over the past decade — almost 20,000 scientific reports have been published on the subject in the last 10 years — we are still just beginning to understand the extent of their usefulness and benefits. However, they are believed to be useful in children, and for those with a history of antibiotic use, probiotics should be strongly considered.

Probiotics are generally considered safe for all ages and anyone with a healthy functioning immune system. If your child is immune-compromised or undergoing cancer treatment, consult with their pediatrician before supplementing.

In total, it is estimated that most people have between 40 to 50 trillion bacteria in their bodies, mostly in the gut. This is more than the estimated 30 trillion human cells10 present. Seeding of the newborn’s gut starts at birth for most if passage through the birth canal occurs. Also, if breastfed, skin bacteria from the mother helps ensure microbiome diversity.

Traditionally, probiotics are considered and used for the following:

The minimal dose of probiotic recommended for children and adults is usually 5 billion CFU (colony-forming units). Teens and adults can take up to 100 billion CFUs once or twice per day. Probiotics come in capsules, chewables, powders, and gummy formulas. Common strains include lactobacillus, bifidobacteria, saccharomyces, or a combination thereof.

When ill, there are also many cough, cold, and influenza supplements available which may help support a stronger immune system while reducing symptoms of illness. A 2012 review study11 recommended vapor rub and buckwheat honey for children. In order to help prevent infections, they recommended probiotics, zinc sulfate, and nasal saline irrigation. Vitamin C and elderberry formulations can also be considered.

Previous Article
4 Factors To Consider When Trying to Get Pregnant
Next Article
A 5-Minute Guide to Serrapeptase: Why It’s Important for Respiratory Health

Difficulty swallowing tablets and capsules is an issue that many encounter. As a result, I have had numerous patients over the years ask for alternatives.

Best of Health & Wellness 2021: 5 Supplements You Should Know

The top 5 supplements of 2021. Find out why some of these products, including probiotics and collagen, have made the list year over year.

3 Supplements To Boost Your Health Routine In The New Year

If one of your New Year's resolutions for 2021 is to give your overall health a boost, consider adding these doctor-approved supplements to your routine.