The Benefits of Elderberry 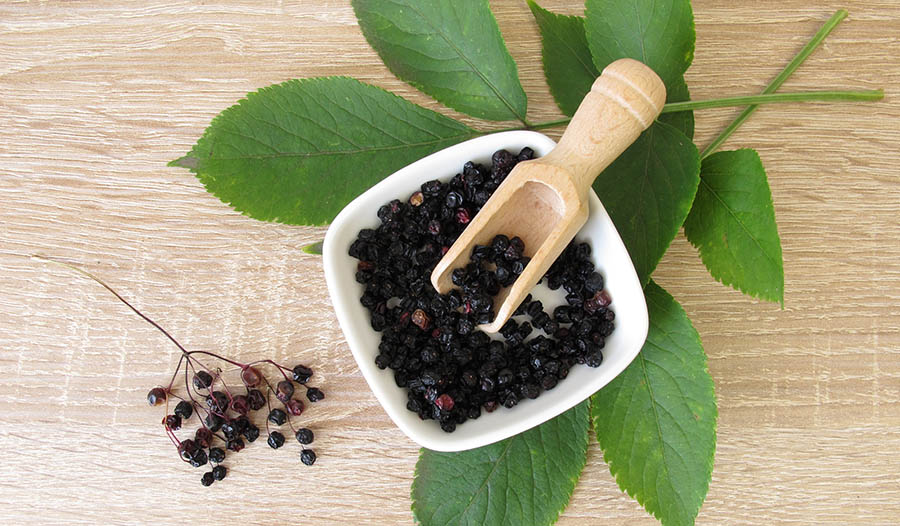 Elderberry (Sambucus sp.), a flowering plant, has been used for hundreds of years for medicinal purposes by native populations all over the world. In recent years, elderberry’s popularity has caught on. Studies measuring ORAC (Oxygen Radical Absorbance Capacity) values show elderberries have higher antioxidant levels than blueberries and cranberries, which are well known for their high levels of antioxidants and subsequent health benefits.

Within traditional medicine, elderberry has been used to treat joint and arthritis-related pain. It has also been used by many to manage symptoms of upper respiratory infections. Elderberries have been used for generations by many in South America for medicinal purposes. Indigenous Americans are said to have used elderberries as a treatment for various infections and fever.   Likewise, in Europe, elderberry fruits were transformed into syrups for medicinal purposes. In Italy, elderberry was used to treat shingles infections, as reported in a 2005 study in the Journal of Ethnopharmacology.

In its raw form, elderberries are about 80 percent water and about 20 percent carbohydrates.  Less than one percent of the berries consist of protein and fat. Elderberries are a rich source of vitamin C (ascorbic acid) and provide more than 25 mg per serving. They also have moderate amounts of vitamin B6 and iron.

Elderberries are rich in antioxidants, specifically polyphenols such as anthocyanins. This is what gives them their bluish-purple color.  In addition, their high antioxidant levels are believed to be one of the reasons they have so many health benefits.

The common cold, a type of upper respiratory infection (URI), is the most frequent infection a person will encounter in their lifetime. It is estimated that there are more than 200 different cold viruses which infect humans. After being exposed, it normally takes one to three days for the illness to start if a person is susceptible. The duration of a cold is usually seven days, but in cases when a person’s immune system is already overwhelmed, a cold can last several weeks.  Generally, the same virus never infects the same person twice as immunity is usually developed after the first exposure to the virus.

While there is no cure for the common cold, there are smart ways one can help prevent infection. These include frequent hand washing, a healthy diet, avoiding contact with sick people, and getting adequate sleep. However, that is frequently not enough, and even those who are careful may find themselves nursing the telltale symptoms.

More dangerous than a cold is the influenza virus, also known as “the flu”, which affects millions of people worldwide annually. Sometimes, influenza can result in death in high-risk individuals (i.e. diabetics, lung disease patients, senior citizens and those with cancer). Death is usually the result of a secondary infection such as bacterial pneumonia. Influenza vaccination is usually advised by healthcare professionals to help reduce the risk of infection.

Lastly,  a 2012 study concluded the concentrated juice of elderberry had a beneficial effect by stimulating the immune system’s response and thereby preventing a viral infection.

The immune system is a complex system in which the body learns to protect itself from bacteria, viral, and fungal invaders which may cause harm. The immune system has developed an intricate mechanism by which it can differentiate those microbes that are harmful from those which are beneficial, such as those in probiotics. Eighty percent of the immune system’s recognition capacity resides in one’s intestinal tract (GALT and MALT), so ensuring one has optimal gastro-intestinal bio-diversity is vital. Healing a leaky gut is crucial for optimal health.

Minimizing stress levels and consuming a healthy diet is important when optimizing one’s immune system. A diet rich in colorful fruits and vegetables is helpful. Specifically, elderberry may also help increase the strength of the immune system according to studies. A 2001 study and 2002 study both showed elderberry’s benefit in strengthening the immune system response.

High blood pressure results when one’s arteries have increased resistance, frequently due to vascular inflammation and atherosclerosis. As a result, the heart has to work harder than normal to pump blood efficiently through the body. When the heart works harder than intended, it can become enlarged, increasing the risk of congestive heart failure and heart disease.

A 2016 study in Pharmaceutical Biology showed that elderberries could be helpful in the management of high blood pressure. A daily generous intake of vegetables and routine physical exercise is also crucial to blood pressure control.

Chronic inflammation is a known risk factor for many health conditions, including heart disease, auto-immune conditions, and joint pains. A diet rich in antioxidants from fruits and vegetables can help lower overall inflammation levels and helps optimize gut health, a factor crucial for overall health.

Type 2 diabetes is becoming one of the world’s most common health conditions. Primarily a lifestyle disease, diabetes results from excess intake of sugar and refined carbohydrates. This results in insulin resistance and, ultimately, elevated blood glucose conditions.

Avoiding excessive intake of refined sugar can play a significant role in the prevention and management of diabetes for many. However, frequently, when diet and lifestyle changes are not enough, a physician will prescribe medications to help manage blood sugar. Some prefer a more natural approach using herbs and supplements. Elderberry is one such herb that appears to be beneficial.

A 2015 and 2018 study using mice showed that elderberry extract could reduce insulin resistance, a ubiquitous finding in diabetics. A 2016 study using an animal study also showed elderberries could be helpful in the treatment of diabetes. A 2017 study demonstrated that elderberry has an antidiabetic effect and may be considered a “functional food” in the fight against diabetes.

Lastly, a 2017 study in PLoS One of a beverage consisting of multiple berries, including elderberry, concluded that these berries were beneficial in the prevention of diabetes, cardiovascular disease, and cognitive decline.

It is important to consult your physician prior to adding any supplements to your regimen if you have diabetes. Never stop taking medication unless instructed to by your doctor.

Cholesterol is a waxy substance that circulates in the blood and lines the inner lining of arteries. Elevated levels are a risk factor for coronary artery disease and stroke. Lowering cholesterol is believed by many to help prevent cardiovascular disease. In general, cholesterol is an important molecule required for brain health, nerve health, and hormone synthesis.

A 2015 study in Food & Function using mice showed that elderberry could help lower total cholesterol levels in the aorta while improving HDL (good) cholesterol, when compared to a placebo, in those mice who consumed them. Elderberries have also been shown to reduce triglycerides in mice studies.

Other studies are evaluating elderberries use for seizure disorders. However, at this time the data is still preliminary. Of course, if you are on seizure medication, it should not be stopped or replaced without your doctor’s instruction.

Elderberry is available as a tea, syrup, and lozenges for sore throats. Also available as gummies and capsules for general health use.

The Health Benefits of Rosemary

81,336 Views
Rosemary is a perennial evergreen herb native to the Mediterranean region. With its fine, needle-like leaves and flowers, it resembles the lavender plant and is related to the mint family.

13,653 Views
Flower essences, also called flower remedies, are infusions made from the flowering part of a plant.