Have You Heard Of Beta-carotene? Here Are The Top 5 Benefits 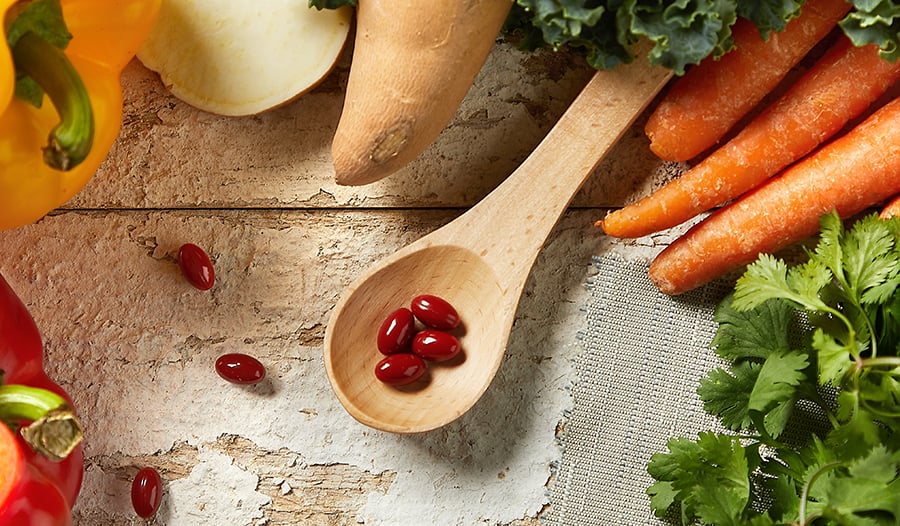 Beta-carotene is a provitamin A carotenoid that is readily converted into vitamin A by the body on demand. Found in various plant-based foods, beta-carotene provides red, orange, and yellow pigmentation to many fruits and vegetables. Discovered in 1831 by Wilhelm Wackenroder, beta-carotene first got crystallized from carrots.

Since then, this colorful provitamin has yielded many health benefits. Since too much vitamin A can be toxic, taking beta-carotene can be a safer option than taking a vitamin A supplement. The body will convert beta-carotene to vitamin A as needed, avoiding any potential vitamin A toxicity.

‌‌‌‌What Are The Benefits Of Beta Carotene?

Provitamin A carotenoid beta-carotene may help prevent the onset of eye disease and can help promote good eye health.

Research shows that a diet high in beta-carotene and other carotenoids may reduce the risk of developing age-related macular degeneration (AMD) by up to 35%. That is particularly true for smokers who are at increased risk of vision loss due to AMD.

Beta-carotene also helps to improve eye health by keeping the cornea—the surface of the eye—healthy and moist. Vitamin A may help improve night vision or low light vision due to its ability to help the eye convert light into a signal sent to the brain.

As a powerful antioxidant, beta-carotene helps reduce the oxidative stress on our eyes caused by exposure to blue light from device screens and UV radiation. By boosting the immune system, vitamin A helps decrease eye inflammation and the risk of developing eye infections.

Because beta-carotene is an antioxidant, it can increase our immune health by reducing oxidative stress in the body. Oxidative stress directly contributes to chronic illnesses, including heart disease, arthritis, Alzheimer’s disease, diabetes, stroke, atherosclerosis, and more.

Antioxidants boost our immune function by scavenging and destroying free radicals. Free radicals cause damage to our tissues, thereby contributing to chronic inflammation and disease formation. Researchers have shown beta-carotene to increase the activity and quantity of immune cells.

Carotenoids like beta-carotene have been linked to gene regulation and angiogenesis, or the growth and development of new blood vessels, affecting immune function.

Primarily attributed to its function as an antioxidant, beta-carotene can help improve skin health and appearance.

Studies show a diet rich in phytochemicals such as beta-carotene helps improve the skin’s defense against UV radiation from the sun. This protection will help the skin maintain its elasticity and decrease the effects of sun damage, including fine lines, wrinkles, and sunspots.

Because carotenoids are fat-soluble, adding an oil like olive or grapeseed oil, eating fatty fish like salmon, or eating nuts and seeds with these foods can help you better absorb the beta-carotene in your diet.

Studies suggest that a diet rich in beta-carotene is beneficial to lung health. Beta-carotene gets converted to vitamin A in the body, which helps with proper lung function.

Due to its involvement in maintaining epithelial cells, or cells in the linings of tissues, vitamin A is vital for a healthy respiratory tract. Vitamin A deficiency during pregnancy can have long-term adverse effects on the offspring’s lung health.

Vitamin A deficiency, along with protein malnutrition, is the most common nutritional disorder in the world. While this mainly affects children in developing countries, more than 20% of the population in the developed world gets less than two-thirds of the recommended intake of vitamin A. Both liver and plasma levels are below the accepted normal range in this 20% due to modern society’s habits of eating foods with poor nutritional value.

Vitamin A deficiency increases the risk of developing and dying from various infections and developing respiratory tract illnesses. Taking beta-carotene supplements can help elevate vitamin A levels safely without the risk of vitamin A toxicity.

Beta-carotene may improve mental health, including cognitive function and memory, thanks to its antioxidant status.

A series of studies found that long-term beta-carotene supplementation improved both memory and cognitive function. Other studies show that antioxidant supplementation remains useful in patients with stress-induced psychiatric disorders, including anxiety and depression.

As a provitamin A carotenoid, beta-carotene has many beneficial health effects on the body. Beta-carotene helps to improve eyesight, immune health, lung function, mental health, and even skin appearance. As a powerful antioxidant, beta-carotene can help boost your immune function, helping to fight off and prevent chronic illness and infections.

Chronic illnesses such as diabetes, heart disease, arthritis, Alzheimer’s disease, and many other ailments have a reduced risk of developing with antioxidant activity provided by beta-carotene and other carotenoids.

Only converted to vitamin A when needed, beta-carotene is a safe way to up your vitamin A levels without risking vitamin A toxicity. Eating healthy fats like avocado and nuts can help you absorb beta-carotene better due to its fat-soluble nature.

Always consult your doctor before adding any new dietary supplements to your wellness regimen.

Discover the health benefits of passionflower. It has many medicinal properties from calming the mind to improving gut health.

Fisetin is a flavonoid found in fruits and vegetables. Studies have shown that it may have beneficial effects on brain health and memory.

Mastic gum is made from the resin of mastic trees found on the Greek island of Chios. It is known to help with digestion, high blood sugar, and IBS.